There is no denying the fact that Tacos are delicious but many people may find them dry. So, to make tacos worth eating, it is recommended to marry them with drinks. Besides margaritas, some cocktails and Mexican non-alcoholic drinks will go the best with Tacos.

When you are at a Mexican restaurant, the feel of being in Mexico is a must. Otherwise, what worth would it be to eat Mexican cuisine, and drinks without Mexican vibes?

So, to give you a full Mexican vibe, La Vista brings you a relaxing Mexican ambience in Hong Kong. Come over to the best Mexican restaurant in Hong Kong and enjoy your day in a Mexican style. Food without drinks is like pizza without cheese. Urgh! Think of it and you would never want to have it again.

So, when you are at a Mexican restaurant, why would you want to compromise on eating Mexican cuisines alone without any drinks?

However, in this blog, we will take you through the Mexican drinks that are non-alcoholic. Let us get into it.

Mexican lagers such as Pacifico, Corona, Modelo, and Tecate are frequently served with tacos. These also taste the best with other Mexican cuisines because they are easy to drink.  Also, these are quite effective at washing down the spicy flavours. Besides, the drinks work as a palette cleanser.

Tequila is the number one Mexican drink but when it comes to refreshing and non-alcoholic Mexican drinks, there is a whole variety. The mouth-watering gems of a drink fit every occasion, people, tastes, and occasion.

Given below are some of the drinks you can try and perk up your heart.

The most popular and amazing Mexican beverages may have lots of alcohol in them, but with gastronomy as varied as the one Mexico boasts, it should be no surprise that there are many amazing non-alcoholic Mexican drinks you probably are missing out from exotic refreshments to delicious hot treats.

It literally translates to freshwater. This is popular flavored water and is sold by street vendors and in restaurants and is also made available in private homes. Agua frescas quench the thirst and hydrate the body much better than any juice or soda. This is probably the reason for the hottest days of the year, you will see people drinking Agua Fresca.

This sweet, comforting and surprisingly refreshing Mexican drink is one of the most delicious. If we talk about Mexico, Agua de Horchata is particularly popular in South East Mexico.

Different types of horchata are consumed in Western Africa and Spain, and in Guatemala, Puerto Rico, Venezuela, and in various Central American countries.

It is quite simple! The letter “H” remains silent, so horchata is pronounced “or-cha-ta” by putting an emphasis on the middle syllable.

There is not really a direct translation for horchata, so just call it by its Spanish name. The weird thing is, it actually does not have any meaning in Spanish. It is either believed that horchata drink “style” originated in Africa, and then arrived in Spain. This is where the actual name of the drink has come from. It has been derived from the Latin term hordeata, which came from hordeum i.e., barley – its original main ingredient.

What is Horchata Made of?

The traditional Mexican Horchata is made from rice, some milk, and water and flavored with cinnamon, and vanilla. Then it is served chilled. This sweet beverage is an ideal complement to spicy dishes such as traditional cochinita pibil from Yucatan. Even though classic horchata is the most popular, you can buy ready-to-drink versions in the supermarket if you are someone like us and if you want to try hands-on the homemade horchata recipe. Every little effort would be worth it.

It sounds exotic, Mexican Agua de Jamaica is just hibiscus tea served chilled. Hibiscus has its origin in either Africa or India.

It is believed that the first hibiscus plants grown in Mexico were grown in Guerrero, which is one of the world’s first hibiscus producers. Even though hibiscus is not from Mexico, it has definitely earned its nationality. 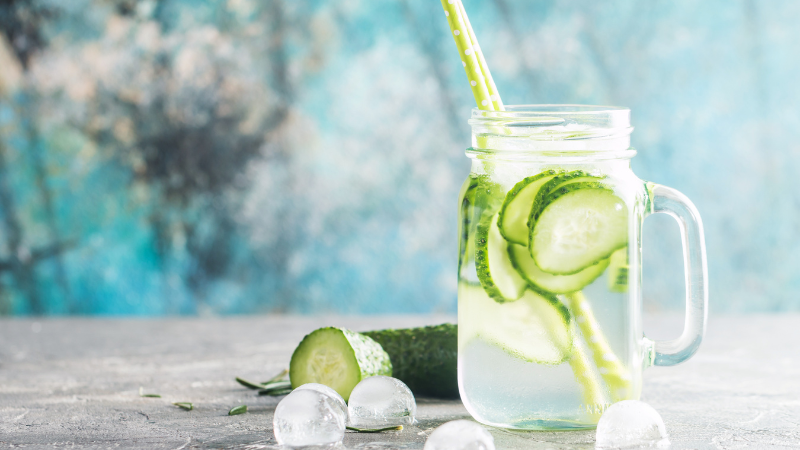 Agua de Pepino is one of the most popular “Aguas de Sabor” flavoured waters. Sometimes additional flavours are added to it such as mint or lime. Other popular Aguas Frescas include watermelon i.e., Sandia, tamarind i.e., Tamarindo, strawberry i.e., Fresa, and cantaloupe i.e., melon.

Cucumbers offer a number of health benefits. These are added easily to the diet. High in nutrition, low in calories, and contain antioxidants. Cucumbers keep the body hydrated and help in weight loss. Also, it lowers the blood sugar level.

Visit La Vista, the best Mexican restaurant for all types of Mexican drinks. Whether you want an alcohol-based drink or you want non-alcoholic Mexican drink, we have got you covered.