What Do Tacos Have in Them?

To say it in the layman’s language, tacos are Mexican sandwich-like dishes. Tacos are made from corn tortillas that are wrapped around fillings of different sorts. Traditionally, tortillas are soft but some variations from different countries have hard shells, as well as flour tortillas.

There are almost 25 types of Tacos namely; Tacos Arabes, Tacos Al Pastor, Buche, Mexican birria tacos, Carne Asada Tacos, Real Mexican Cow’s head tacos with cilantro and onion, Campechano’s tacos, pork carnitas street tacos etc. Today, almost every type of taco is available in every corner of the world. Tacos – a popular Mexican dish has earned quite a name and fame around the globe. No matter where you are in the world, you can satiate your cravings for eating deliciously tempting tacos. For instance, if you are in Hong Kong, come over to La Vista, the best Mexican restaurant in Hong Kong.

Taco and Its Making 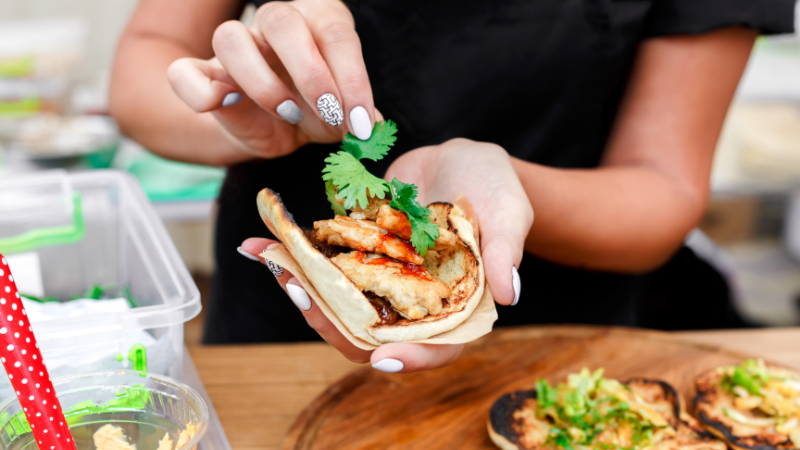 Tacos are made in a variety of ways i.e.; different types of fillings are used to make tacos. Vegetarian people might prefer it with loads of fresh greens, beans, vegetables, and cheese while non-vegetarians can go for beef, meat, chicken or other fillings of their choice.

Different types of fillings allow for great versatility and variety.

To make the aesthetically appealing and even more delicious, tacos are garnished with ingredients such as salsa, guacamole, sour cream, and vegetables, like lettuce, onion, tomatoes, and chiles.

However, nowadays, people just put almost everything they get on tacos. The basic toppings you can find are lettuce, shredded cheese, and diced tomatoes. Finally, just bake chicken, beef, or pork that sits at the bottom of the taco.

Lime is one of the essential authentic Mexican taco toppings. A squeeze of lime adds a dash of acid that brings out other flavors of ingredients in a taco beautifully. Onions, cilantro, pico de gallo, sliced radishes, cucumbers, avocado, and chilli peppers are some of the standard toppings for authentic tacos. 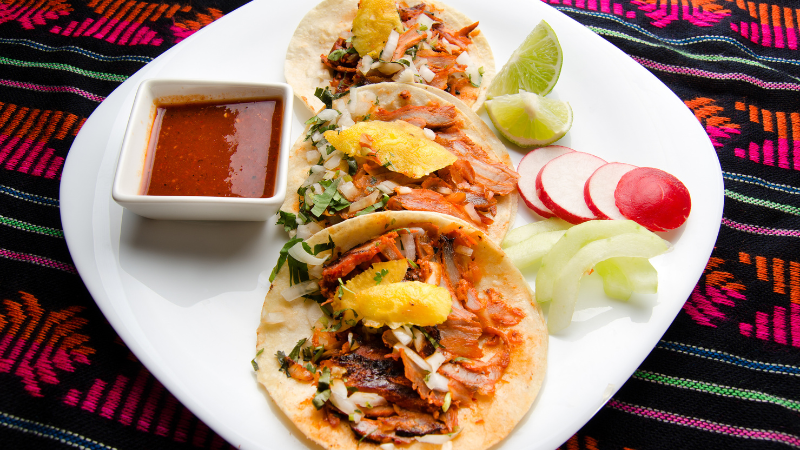 Tacos al pastor, a famous cousin to the taco árabe, is also called shepherd-style pork. The meat is marinated in chillies and spices. Then it is cooked slowly on trompo using an open flame. The spinning mound of pork is then topped using pineapple. Thin flecks are garnished for a sweet, tangy kick.

This is one distinct dish that showcases the culinary connection between the Middle East and Mexico. Taco árabes utilizes flavorful slices of pork i.e., a departure from halal-friendly proteins of the Arab and Muslim-majority region from a trompo or spit. The marinated pork is then stuffed into the soft, pillow-like, pita-like flour tortillas. 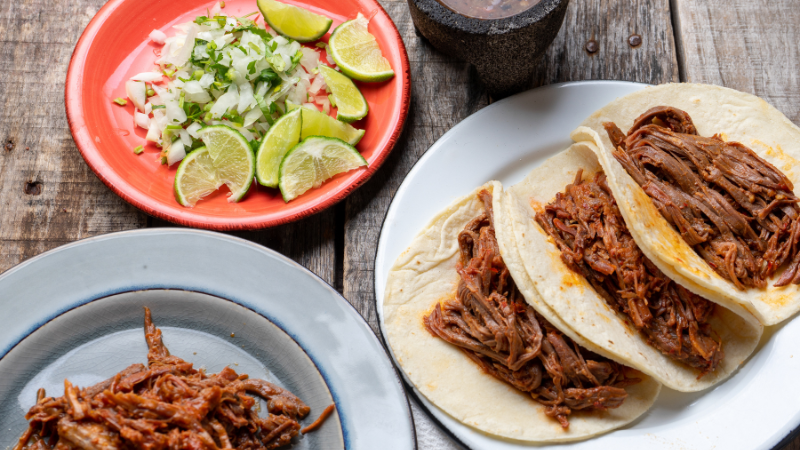 Alvarez traditionally says barbacoa references the style of cooking meat by the Taino people of the Caribbean. In Mexico, it is known as slow-cooking over an open flame or in a hole dug into the ground until the fatty protein gets tender. If we talk about Northern Mexico and in south Texas’ Rio Grande Valley, the economic-yet-flavorful beef head or even beef cheeks i.e., cachet or goat i.e., cabrito is often utilized and served on weekends, such as at Vera’s Backyard Bar-B-Que in Brownsville.

This type of taco you will find in the Western state of Jalisco.

To make this taco, spicy meat stew is prepared with the goat that is marinated in a spicy guajillo chilli-based broth. It is often served during weddings and other occasions. Birra is traditionally a special occasion dish but comes in the form of taco.

Buche is the stomach of the pig. When Buche is stewed for several hours using a variety of spices and chiles, the meat breaks down to a tender and chewy texture. Most people may consider Buche to be less spongy than beef tripe.

The meat from the cow’s head is already flavorful and requires only salt. At times, it is braised to tenderness while other taquerias may serve it as al vapour or in a steamed form.

Typically, in Southern Mexico, Campechanos are for when you cannot get enough meat.

Tacos Campechanos are made with a combination of the leftover to create a new and complex-in flavour medley of meats. Normally, it is a combination of carne asada or Cecina de res i.e., thinly sliced beef, longaniza i.e., a spicy pork sausage, or chorizo and even chicarrón, therefore giving a balanced mix of salt, spice and crunch.

Carne Asada is grilled meat, but here it is referred to as ranchera or flap steak. It is typically found in Northern frontier states. The meat is marinated in a blend of citrus juices, cumin, and other spices. After that, it is simply grilled. This specific cut of meat is thin which makes it easy to grab a hunk with a tortilla

This particular cut of meat is especially thin, making it easy to just grab a hunk with a tortilla and eat it just plain.

Cecina, or carne, is beef or pork that has been expertly sliced, salted, and dried partially in sheets or strips in the sun, or smoke. For beef, a large piece is marinated in a coat of chili pepper, therefore turning it into a continuous roll of slices. What you get is smoky meat which can be folded easily into a tortilla without the need to chop it into small bits.

Most of you must be familiar with Chicharrons as pork rinds, or fried pork skins. Alone, Chicharrons are a satisfying snack while watching the big football game. But as a taco filling, they take on a whole new quality. Tacos de chicharron is soft, not crispy, after being simmered in salsa Verde for a spicy, somewhat chewy (but in a good way) combination.

Chorizo came from Spain. It is usually cured and smoked. In Mexico, it is sold uncooked and fresh. Mexican chorizo is a blend of minced meat like pork which is seasoned with chili peppers. To cook it, ground meat is removed.

There are different types of tacos and you may or may not find all these types in Hong Kong. But You can definitely satiate your hunger pangs by visiting La Vista, the best Mexican restaurant.

Here, you can enjoy tacos by being in proximity to nature. Come alone or in a group, you will definitely leave giving a Mexican smile. So, why wait for anything? Come, let us vibe together and taco about fun and frolic.