Which Mexican Food is Wrapped in Corn Husk?

Mexican food has its variations. Cooking meals with corn husk is a part of traditional Mexican cuisine but it is also used nowadays.

We will answer a few recently asked FAQs about Corn husk and Mexican cuisine in this article.

What is Corn Husk?

Corn husks are the outer shell of an ear of corn.

Corn husks are generally the whole husk either oven-dried or in the sun, and air. For most applications, the corn husks need to be drenched in hot water to make them malleable. Most commonly, people used to wrap foods that needed to be steamed or baked with a cover, imparting a very light corn flavor. Corn husks can be used to deliver a dish. However, these are not edible and should be scrapped after use.

Corn husks are available every season of the year.

A new husk was introduced a few years back in the U.S. market called “Encantada.” This directs to the conch-shaped shell of the piled husks. The higher quality Encantada style husks come in sizes varying from 7″-9″.

Which Food is Cooked in A Corn Husk?

Tamales are a classic Mexican dish made with a corn-based dough blend filled with different meats or beans and cheese. Tamales are wrapped and cooked in corn husks or banana leaves but these are pulled from the husks before eating.

What Type of Meat is Used in Tamales?

It all depends on what you want to eat, except fish you can stuff a tamale with anything!

Can We Eat the Corn Husk on A Tamale?

The answer to this question is no. You are not supposed to eat your corn husks, and they are just used for cooking purposes to prevent tamales from burning.

There are tamales where you can eat the shell, but not the corn one. You can eat tamales from Mexican restaurants in Hong Kong.

What To Do with Leftover Corn Husks?

You can add them to your stock for an extra-woody taste, which could go best in mushroom soup or corn chowder. Or, like a tamale, use those husks as a shell for sticky rice in place of lotus leaves.

Is Corn Husk Good for Anything?

There are numerous uses of corn husks. The most common is in cooking, where they are often used for covering tamales, a Mexican dish made of cornmeal batter, and shredded meat. Corn husks are also used for wrapping fish and other types of seafood to be grilled without burning.

Why Are Tamales Wrapped in Corn Husk?

Corn husks bind the tamales together and help them from drying out. The corn husks let the steam penetrate while the tamales cook. You can also find dried corn husks online on various sites.

What is Tamale Dough Made Of?

They are made from masa harina, oil, baking powder, salt, and broth. Just five ingredients are enough to make light, tender, and scrumptious tamale dough!

In Which country Are Tamales Eaten?

Tamales are a portion of favorite comfort food in Mexico, eaten in breakfast and dinner mostly, accompanied by hot atole or champurrado and Arroz con Leche or maize-based beverages.

Why are Tamales Eaten at Christmas?

Making tamales during the Christmas holidays is a custom for Mexican or Mexican American households passed down for years.

What is the Most Common Meat in Tamales?

Pork and Beef are the most preferred options for tamales. Place all elements in a slow cooker on low flame for 6-8 hours, and you get your flavorful stuffing.

What Happens If You Eat Corn Husk?

While most leaves are edible but not usually consumed with tamales, corn husks can cause choking or an upset stomach if swallowed.

It is always preferred to remove the corn shell and enjoy the tamale.

What Sauce Goes with Tamales? 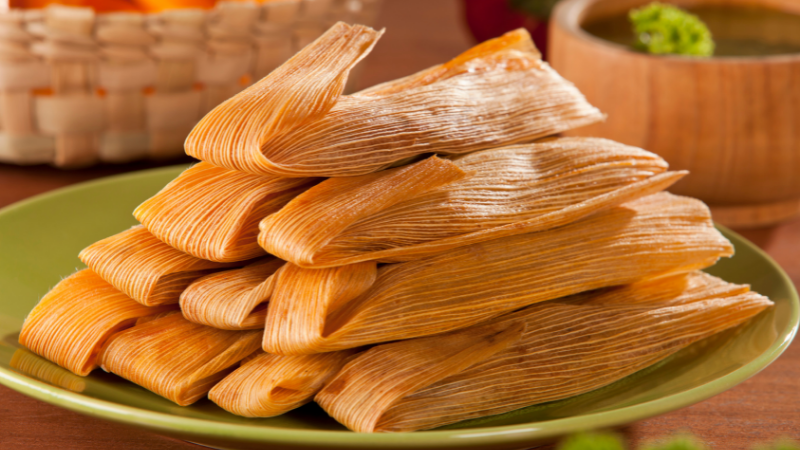 To pick a few favorite choices, tamales can be served with any number of sauces like ranchero sauce, guacamole, and sour cream. But, the most popular of them is the classic red chili sauce, not to be confused with the ranchero as said above sauce.

What is a Good Side Dish with Tamales?

A corncob is the central core of an ear of corn. Young ears, also called baby corn, can be gulped raw, but as the plant ripens, the cob becomes tougher until only the kernels are edible.

What is a Corn Ear?

The ear is the sharp part of the corn plant that holds kernels. Every row of corn on a corncob has the exact number of kernels, and the average ear of corn has 800 kernels.

What Else Can You Do with Corn Husks?

As you can see, there is no necessity to throw away corn husks, although you can compost them and use them for crops. You can also add corn husks to stock, soup, and chowder, and add fresh husks to the broth. A charming touch in Mexican tortilla soup or corn chowder. Always remove the husk before consuming it.

What Can I Make with Corn Husk?

Tamales are just some ways to use them: Dried corn husks make the traditional Mexican dish tamales.

Wrappers: The husks can also be used before drying as wrappers for grilled or steamed food, comparable to banana leaves or avocado leaves.

You can have the best Mexican food in Hong Kong at La Vista, and we promise no corn husks will suffocate you.